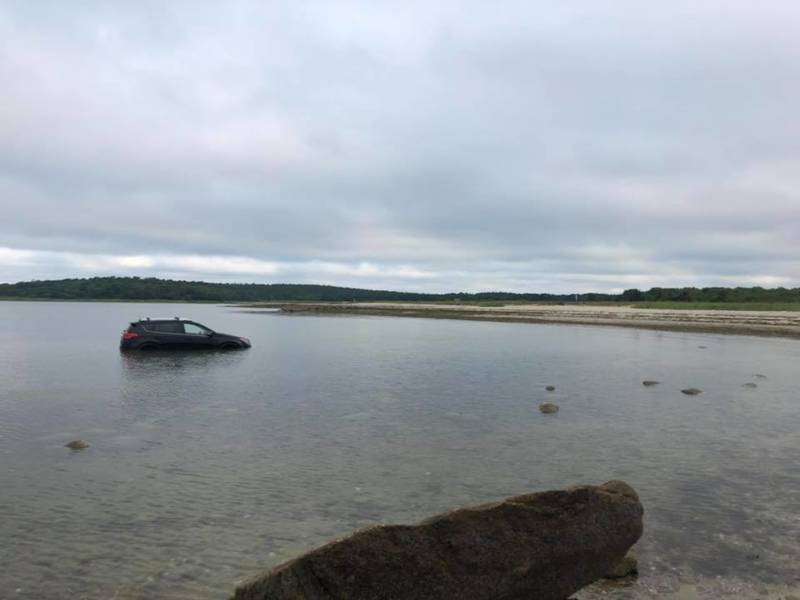 An SUV of a 23-year-old woman was found in the water off Little Harbor Beach Friday morning. The woman was charged with drunken driving after the Wareham Department of Natural Resources was notified of the car. Lauren Heyward, the driver of the car was at her home when police found her, she will be summonsed to the Wareham District Court on one count of OUI.

Fortunately, it appears that no one was injured in the accident!  In circumstances similar to these, often the criminal complaint includes a count charging the suspect with leaving the scene of an accident, causing property damage.  To prove this additional charge, the Commonwealth must prove the following elements, beyond a reasonable doubt: 1. The defendant operated the motor vehicle; 2. While operating the motor vehicle, the defendant caused damage to another vehicle or property, either by colliding with it or some other way; 3. That the defendant knew that the accident had caused damage; and, 4. That after causing such damage, the defendant failed to stop and make known their name, home address, and registration for the motor vehicle.

With respect to the charge of OUI, Alcohol, the Commonwealth may face difficultly proving two material elements of the charge.  First, with limited circumstantial evidence of who in fact operated the motor vehicle, and when and how it was operated, the Commonwealth may not be able to prove the element of “operation.”  In other words, that the defendant, and no one else, operated the motor vehicle.

Second, the material element of “under the influence” could also be difficult to prove by the Commonwealth because, it appears there were no field sobriety tests conducted, to ascertain the mental faculties of the alleged operator of the motor vehicle.  It also appears that there was no blood/alcohol level ascertained by means of breathalyzer testing or blood test. With no on site field sobriety tests, conducted in the proper and standardized manner, and no blood alcohol level recorded, the Commonwealth could have a difficult time proving, beyond a reasonable doubt that the alleged operator was under the influence of intoxicating alcohol at the time of operation, and the consumption of intoxicating alcohol impaired their ability to operate the motor vehicle in a safe manner.

It will be interesting to see how the case proceeds.  Most importantly, no one was injured!

If you, or someone you care about has been charged with OUI, Alcohol it is imperative you speak to a Massachusetts Attorney that specializes in OUI Defense.  Call Attorney Vincent A. Tofani now for your free consultation at 617.886.0500.

Vincent A. Tofani is a Boston criminal defense lawyer who will fight for your rights. He is a top criminal attorney who has received many honors, such as in 2015, he was named as one of the Top 10 Under 40 by the National Academy of Criminal Defense Lawyers. He was also named a Super Lawyers Rising Star, which recognizes the top 2.5% of criminal defense attorneys who have successful practices and are under the age of 40.